Showing posts from November, 2013
Show All

Riding Bodas in 'outside countries' 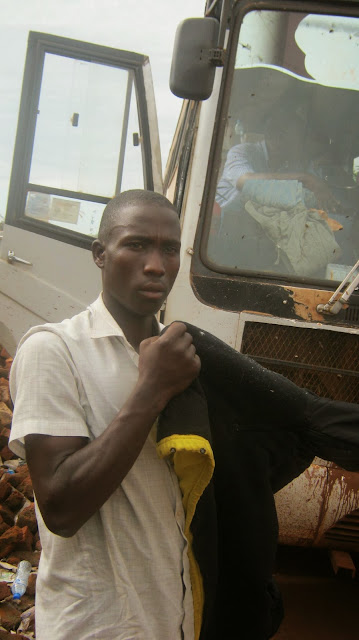 Riding Bodas in ‘outside countries’ Recently when a friend of mine learnt that I was spending a night in Juba waiting for my connecting flight, he said we cannot fail to meet, for it is unforgivable to not meet fellow Ugandans when one is in ‘outside countries’. I laughed so hard but somehow I actually knew exactly what he meant. There is something so special about meeting a human piece of home when one is away, even if it is as close by as south Sudan. This reminded me of a boy I met on that fateful journey. Angel and I had decided to just sit and watch people as we waited for the police to check our bus and it was taking longer than we had anticipated. Then we met him, and he told us his name was Robert Ndahura. He looked reserved, but when he greeted me and stood next to me, I thought he was rather interesting. Angel and I later sat next to him when we moved closer to the bus, hoping they would notice how impatient we had grown and finish whatever was delaying the set off
Post a comment
Read more

THE GIRL WITH THE TWO BABIES

November 10, 2013
THE GIRL WITH THE TWO BABIES I have heard of stories about immigration. I have seen touching stories about Mexican “illegal immigrants” in the US on Aljazeera. Those painful moments when a family is thrown away as if they were only stones, not even worthy enough to be pebbles, causing no stir in the water at all, in the big sea of this federation of continents. Many times I found myself thinking they were only stories. And when something is a story, no matter how real it is, it is not part of our reality. Even if it is presented in 3d. People find a way of removing their 3d glasses when the images are getting too close. We keep our illusion intact, that it’s just a story. But somehow that day, all those shields came tumbling down and there I was, in the moment, in the story, witnessing challenges of immigration. There was this woman on the bus. Many people had developed a kind of dislike for her by the time we reached the border because she got out of the bus every time it s
Post a comment
Read more

DAY TWO; DELAY As daylight brightened up the sky, we came to a halt. The bus parked behind a row of trucks and though I kept thinking it had to be the border (it was hard to see ahead from where I was seated), I didn’t want to believe so. It was in the middle of nowhere, surrounded by only the bush (this much one could tell from any angle of the bus), and the road had one and a half lanes. Half of the other half was filled with mud and stagnant water. As I watched passengers move out, confirming my fears, I almost wished I were still asleep. But as it is, I was awake, and my neighbor was rambling about a thousand reasons why we were where we were, and I had to get out. I got to learn from another passenger that the border was ahead and that we had to hurry as there would be a long queue at the immigration clearing point. We walked. We walked along that abandoned dirt road in the middle of the bush and until now I find it hard to believe that it took us not less than
Post a comment
Read more

Delving into South Sudan on a road trip.

November 09, 2013
DAY ONE; A MAGICAL SIGHT We arrived at the agreed point at 6:30pm. I was traveling with my housemate, and work mate, and one of my best friends, who, for lack of interest to go into details of her real name, I will call Angel, as that is what I call her. There was only Ibra, one of the other Rafiki members we were travelling with. May be I should mention at this point that we were a group of six, four men and two women, all belonging (except me, who was hatching up plans of resigning but had a project to finish up before that) to a theatre troupe named Rafiki Theatre ltd. We had been invited by HTPVK (Holy Trinity Peace Village, Kuron- which is a village deep in Eastern Equatoria province, south Sudan, neighboring Ethiopia. The Toposa, who are the main inhabitants of the village, are closely related to the Ugandan Karamajongs and the Kenyan Turkana. They are very neglected, much like their brothers and sisters up in Karamoja, only worse since the state has very little and mostly
Post a comment
Read more
More posts